IT-Security – the risks, challenges and solutions

To most companies, ransomware is a constant threat.

As the name indicates, ransomware is a software that takes over (parts of) an IT-installation with the aim of forcing the owner to pay a ransom to regain the command.

The problem is rapidly increasing these years. According to research by Cognyte, 1,097 organizations were hit by ransomware attacks in the first half of 2021. Compare this to 1,112 attacks for the entire year of 2020, and you have the number of attacks almost doubled.

This increase is mirrored in the latest predictions by Gartner. They expect at least 75% of IT organizations to have faced one or more attacks by 2025.

In order to mitigate the risk of having data hijacked, many have acquired advanced systems for detecting and preventing intrusion.

Various tools are available, but fundamentally the key is to have a well-architectured IT-network which is maintained and trimmed on an on-going basis.

The standard procedure is to have a firewall setup protecting the internal network.

This is brilliant for protection against hacking from outside. But often the threat comes from the inside, where malware is unconsciously introduced by employees.

Quite different measures are needed to mitigate that: Internal firewalls on servers, network segmentation, and separation of production environments from e.g. development- and test-environments.

Some standards require even more segmentation for the companies to be compliant e.g. PCI-DSS and GDPR.

The task is to make sure that only the needed network traffic is allowed within the IT-network. Irrelevant traffic should not be allowed. This will reduce the probability for ransomware to spread inside the network, and thus provide a good protection.

Sounds simple, but there are some challenges:

The way to solve the problem is quite simple these days. It requires a basic discovery tool and some well-functioning processes. 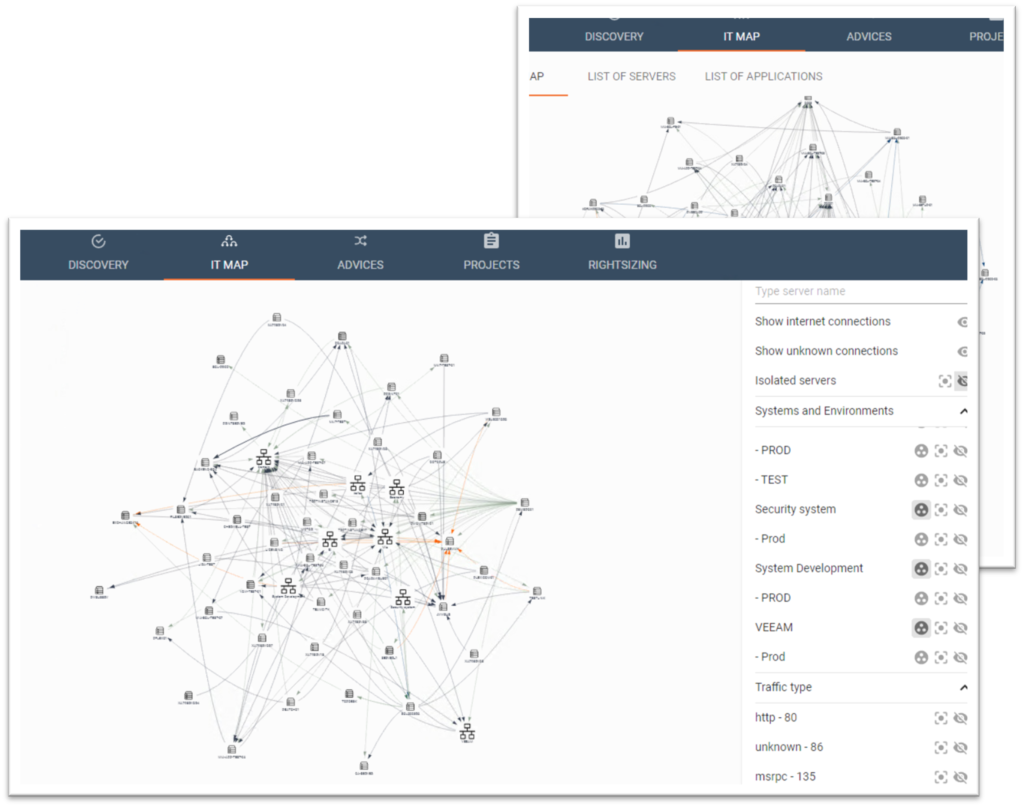 At BOSCO we have designed a software for mapping an entire IT-installation into an intuitive overview. This enables our customers to track and monitor all IT-network traffic – not just in one frozen picture, but continuously over time: during the day, the week, and/or the month.

This enables our customers to…

…And architecture their IT-infrastructure:

We use cookies on our website to give you the most relevant experience by remembering your preferences and repeat visits. By clicking “Accept All”, you consent to the use of ALL the cookies. However, you may visit "Cookie Settings" to provide a controlled consent.
Cookie SettingsAccept All
Manage consent

This website uses cookies to improve your experience while you navigate through the website. Out of these, the cookies that are categorized as necessary are stored on your browser as they are essential for the working of basic functionalities of the website. We also use third-party cookies that help us analyze and understand how you use this website. These cookies will be stored in your browser only with your consent. You also have the option to opt-out of these cookies. But opting out of some of these cookies may affect your browsing experience.
Necessary Always Enabled
Necessary cookies are absolutely essential for the website to function properly. These cookies ensure basic functionalities and security features of the website, anonymously.
Functional
Functional cookies help to perform certain functionalities like sharing the content of the website on social media platforms, collect feedbacks, and other third-party features.
Performance
Performance cookies are used to understand and analyze the key performance indexes of the website which helps in delivering a better user experience for the visitors.
Analytics
Analytical cookies are used to understand how visitors interact with the website. These cookies help provide information on metrics the number of visitors, bounce rate, traffic source, etc.
Advertisement
Advertisement cookies are used to provide visitors with relevant ads and marketing campaigns. These cookies track visitors across websites and collect information to provide customized ads.
Others
Other uncategorized cookies are those that are being analyzed and have not been classified into a category as yet.
SAVE & ACCEPT